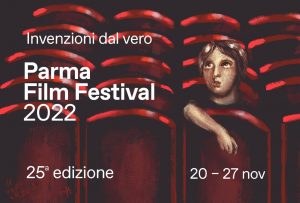 From 20 to 27 November, eight days dedicated to previews, prestigious guests, master classes, book presentations in the name of auteur cinema: the competition for the best documentary is also back.
Among the protagonists: Valeria Bruni Tedeschi, Pupi Avati, Ilenia Pastorelli, Ludovico Bessegato, Michel Ocelot (at the preview on 19 November) Caterina Guzzanti and Carlo De Ruggieri with the authors of the BORIS 4 series (closing on 28 November).

Five major European premieres and two Italian films that will be released in theaters during the Festival. Objective focused on quality cinema, but with a heart open to emotion, where history meets the social, personal dynamics and real life: we start on Sunday 20 with "Tori and Lokita" by the Dardenne brothers, already guests of a previous edition of the Festival, to arrive on the Sunday following “Masquerade – Thieves of love”, the action comedy by Nicolas Bedos set on the French Riviera with a super cast, which in Italy will be one of the Christmas films. And then again a comedy that makes you want to go back to the cinema like "L'innocent" by and with Louis Garrel (a film that is a real natural antidepressant), "The corset of the empress" that the Austrian Marie Kreutzer dedicates to a 40-year-old Sissi princess who has to deal with the passage of time and her intolerance of court rules, "Forever Young", the beautiful film by Valeria Bruni Tedeschi, in which the Italian actress and director brings into play by recalling the years - in the mid-80s - in which she was admitted to attend the prestigious theater school created by Patrice Chéreau and Pierre Romans. However, two Italian films are also on the bill: "Notte ghost" by 31-year-old Fulvio Risuleo, one of the most interesting voices among the new generation of our cinema and "Princess", by Roberto De Paolis who after "Cuori puri" still travels through the suburbs to follow the misadventures of a young Nigerian prostitute. The films will be screened at the Astra cinema and at the D'Azeglio cinema.

In addition to Ninetto Davoli, protagonist of the preview of the Festival which took place on Monday 14th, many directors, performers, producers, showrunners, critics and historians will arrive in Parma: from Valeria Bruni Tedeschi to Pupi Avati, from Ilenia Pastorelli – who will receive the Schiaretti Award - to Michel Ocelot, from Luca Vendruscolo to Giacomo Ciarrapico with Caterina Guzzanti and Carlo De Ruggieri - who will collect the best Italian series award for BORIS 4 - from Daniele Vicari to Fulvio Risuleo, from Ludovico Bessegato to Davide Ferrario, from Roberto De Paolis to Yothin Clavenzani, from Angelo Barbagallo to Roy Menarini and Giampiero Brunetta.

This website uses cookies to improve your experience while you navigate through the website. Out of these, the cookies that are categorized as necessary are stored on your browser as they are essential for the working of basic functionalities of the website. We also use third-party cookies that help us analyze and understand how you use this website. These cookies will be stored in your browser only with your consent. You also have the option to opt-out of these cookies. But opting out of some of these cookies may affect your browsing experience.
SAVE & ACCEPT
Powered by